At this time of Remembrance we think of our military veterans, especially those few remaining of the great generation who fought for freedom in our darkest hour.

In 2009 Cokebusters established its own charity, D-Day Revisited, offering practical support to elderly veterans wishing to visit invasion battlegrounds in Normandy.  Now in a changed world due to the effects of a global pandemic, we reflect on last year’s historic 75th anniversary of the D-Day assault of 6th June 1944, when for the final time the D-Day Revisited team supported their veteran friends in the poignant journey to France to pay tribute to those they left behind.

In a mammoth effort to support the charity’s endeavours ahead of this significant anniversary, Cokebusters engineers worked busily to complete restoration of the D-Day Gunboat MASB-27.  This 3 year project was brought to a successful conclusion as the completed boat was launched in Southampton in early May for immediate sea trials before crossing to France for the first time since leading the US 1st Army into its assault on Omaha Beach, leading to the liberation of Europe.

On the evening of 2nd June 2019, forty veterans gathered at General Eisenhower’s D-Day HQ, Southwick House, for a grand send-off dinner ahead of the Channel crossing to France. Although our veterans are the VIPs, also in attendance were Susan Eisenhower, Henry Montgomery, John Millin and various distinguished guests. RAF veteran, Rose Davies (aged 102) presented memento gifts, with the veterans’ group in high spirits looking forward to the week ahead.

The following afternoon the Brittany Ferries vessel was escorted out of Portsmouth harbour by HMS St Albans, four Royal Navy P-2000 patrol boats and a cluster of Dunkirk ‘Little Ships’. Among this naval tribute were four gunboats of the D-Day Memorial flotilla, including MASB-27.  Commanding Officer, Commodore Rex Cox RN, led a crew of serving officers, with three Cokebusters staff on board.  Manning the Vickers .50 calibre machine gun turret, John Phipps gave the salute to veterans. 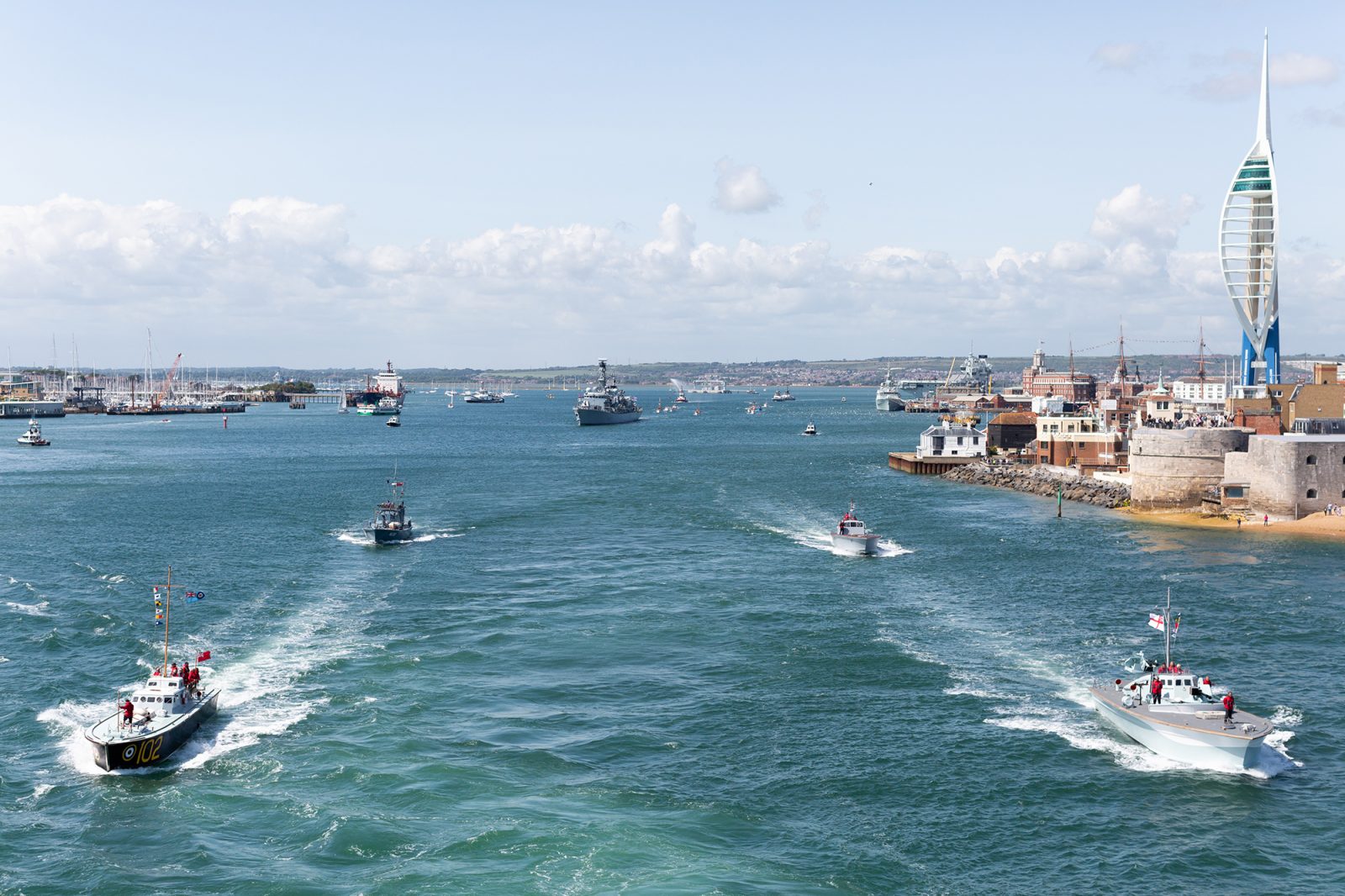 In derelict condition, this celebrity Motor Anti-Submarine Boat arrived at Cokebusters HQ near Chester UK in April 2016.  It was judged by the Portsmouth Naval Base Trust as worthy of rescue.  So, 27 became the only remaining gunboat of its type in seaworthy condition, approved to fly the Royal Navy White Ensign.  Along with clandestine duties off the French coast and successful co-ordination on air-sea rescue, 27 is known to have led US troops into the fateful assault on Omaha Beach.

In Cokebusters’ care, maintaining much of the original structure, the boat was thoroughly cleaned and rebuilt.  With a passion for engineering, extensive works included fabrication of new deck beams to exactly match existing curves, new interior and superstructure.  The British Ministry of Defence provided archived detailed drawings, many of which were stamped “Confidential” and “Top Secret”.  Gaps of information were filled in from 1940s photographs which were computer analysed to reveal dimensions. 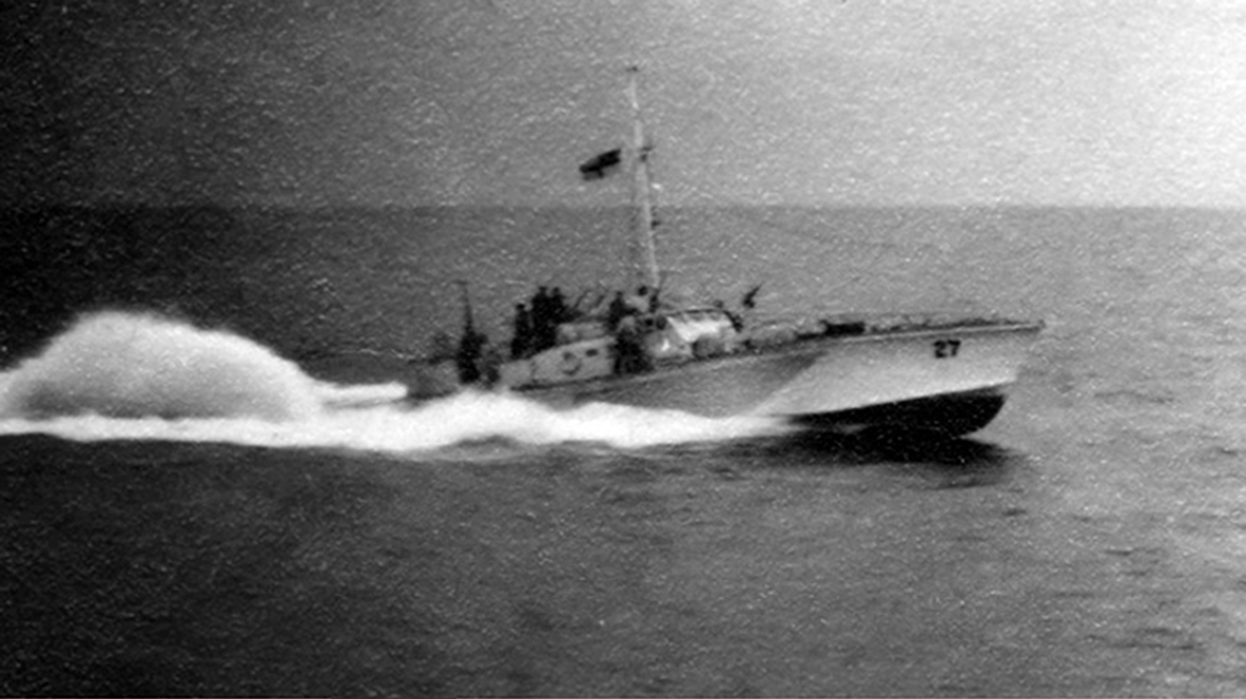 Three new turbo-diesel engines were provided by the Cummins factory in Darlington, precisely mapped at 550 horsepower each to match the original wartime Napier petrol engines.  Marine transmissions came from Twin-Disc in the USA.  Interior fit-out included a Captain’s cabin, wardroom, foreward mess deck, chain lockers, fuel storage, engine room and aft steering compartment.  Superstructure contains wheelhouse, with adjacent radio and ASDIC stations.  Every step bumped into engineering history and heritage. Such boats were pioneers of their day known as ‘Spitfires of the Sea’, with high power and high speed.  Some were fitted with the renowned Rolls Royce ‘Merlin’ engine and it was this British design used by the United States in production of their PT Boats, one of which was skippered by JFK.

Completed in April 2019, exactly three years from arrival, the vessel was lifted onto a specialist trailer for the road journey to Southampton.  Sea trials completed, the restored 27 was visited by veterans as they readied for departure.  After the salute, the skipper set course for Ouistreham and the flotilla of three fast gunboats opened throttles to 30 knots.  For the first time since 1945, our restored gunboat was once again under her own power, heading at high speed for the French coast last seen during those intense days of invasion.

During the anniversary week MASB 27 was moored on the River Orne alongside the famous Pegasus Bridge landing site where the first paratroopers dropped into enemy-occupied France just after midnight on 6th June 1944.  There she was visited by D-Day veterans and tourists, all interested to learn more about her role during Operation Overlord and the project which restored her to her former glory.

Special thanks goes to Cokebusters Senior Engineers, Lukasz Kremski and Andy Edwards. Thanks also to the military crew, including Sub-Lieut Dan Pownall from HMS Prince of Wales and to Admiral Neil Rankin for support from the Portsmouth Naval Base Trust.

Most of all we thank our veterans, especially at this time of Remembrance.  Fittingly included last year was Bert Chandler, US Army veteran of the first wave assault on Omaha.  Thanks to Gary Winter, C.O.O. of Cokebusters USA for arranging and meeting costs of Bert’s flight from Boise, Idaho.  Sadly, Bert passed away a few months later.  Even so, his daughter, Cheryl, expressed how much he enjoyed visiting France with the Brits – allies together once again. 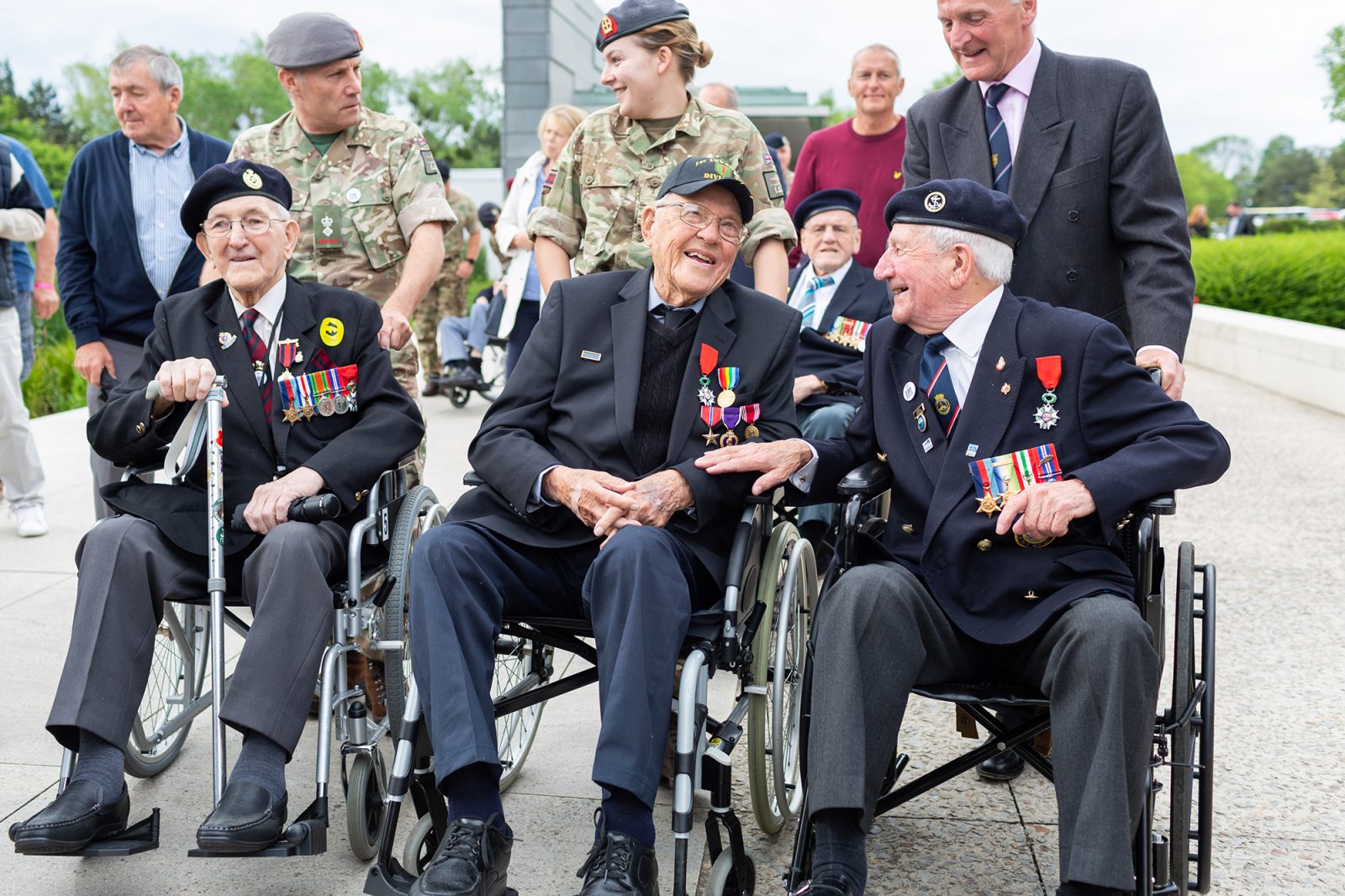 Cokebusters are aware of the negative impacts that the daily running of the business can have on the environment. Our aim is to prevent and minimise this impact, whilst continuously creating positive improvements to ensure a positive effect on our local environment and globally.